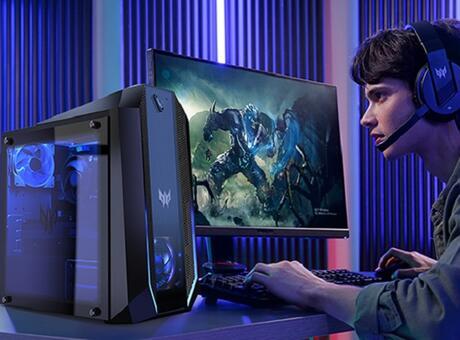 “We have included the most innovative and powerful technologies of our day in our newest players.” "As one of the leaders in the gaming industry, we want to help players gain an edge over their rivals with feature-rich robust systems and devices that push the boundaries of performance, ease of use and comfort."

Predator X25 can automatically adjust the brightness and color temperature according to the ambient light. Thanks to its LightSense feature, Predator X25 detects the lighting level of the environment and automatically adjusts the brightness level and provides a comfortable viewing experience. AdaptiveLight feature automatically adjusts the backlight of the monitor based on the light level of the room. The ProxiSense feature, on the other hand, reminds players to take a break after a certain period of time. This ergonomic monitor has the possibility of tilting -5 degrees, rotating +/- 30 degrees, and rotating +/- 90 degrees with -5. In addition, the height can be adjusted up to 4.7 inches.

The Acer AdaptiveLight feature in the new series allows players to be comfortable in long game marathons. Ergonomically designed models come with a stand that offers the ability to tilt forward, turn around the axis, tilt and adjust height. With the RGB LightSense feature, players can choose whatever color, speed, duration and brightness they want among the various lighting effects. These effects can also be adjusted to respond to games, music or video content.

Fast and reliable wireless connection is achieved with integrated KillerE3100G and Intel WiFi 6 support. It is also possible to overclock with a single button in the system. The side panel made of EMI compatible edge-to-edge tempered glass reveals the colorful ARGB lighting in the internal fans. The design, which does not require tools, makes it easy to make changes to the system. The casing and arm chassis also have a handy dock for headphones.

The new Predator Orion 3000 models were developed for players looking for a mid-size tower-type case to enjoy their favorite games or enter the publishing world without sacrificing performance. Thanks to the 10th Gen Intel Corei7 processor and GeForce RTX 2070 SUPERGPU, the product can handle many games. With this up to 64GB of 2666MHz DDR4 memory, 1TBPCIe NVMe SSD and two 3.5-inch SATA3 hard drives, everything you need to edit and store video is within reach. Two specially produced Predator FrostBlade fans effectively regulate the air inlet and outlet to lower the temperature. The lights on the fans and the vertical bars on the front of the case can create special effects with 16.7 million colors thanks to the PredatorSense software. The optional EMI compatible tempered glass side panel reveals powerful components and colorful RGB. The Killer E2600 delivers high-speed gigabit network performance, while IntelWi-Fi 6 features high-speed, low-latency Wi-Fi performance.

Nitro 50 Series desktops offer powerful performance for a smooth experience in games and demanding applications with GPU options up to 10th Gen IntelCorei7 models and GeForceRTX 2060 SUPER GPU. Up to 64GB of DDR4-2666 memory also provides the highest possible performance. Sharp lines and red LEDs create an impressive gaming atmosphere, while the 18-liter chassis fits comfortably under the table.

The newest mouse model of the Predator series offers players fast and precise control without wires lying around. Since different game types require different game styles, there are separate settings for each. With the Predator Cestus 350, players can take advantage of the DPI settings (up to 16,000 DPI) obtained with the highly sensitive Pixart 3335 optical sensor and assign tasks to 8 programmable buttons. Thus, they can create five special profiles suitable for each game. The product also has a query rate of 1 ms / 1000 Hz with wireless connection, 0.5 ms / 2000 Hz with wired connection.

Designed with professional players and e-sports enthusiasts, Predator Gaming Chair x OSIM massages the neck and shoulders of the user thanks to the OSIM V-HandMassage Technology that mimics the hands of professional masseurs. This massage chair, which massages the entire back with techniques such as scrubbing, pressing, rotating and tapping, has been specially developed to relieve tension while playing and provide physical comfort both during and after the game.

This comfortable and ergonomic seat can be adjusted in many ways. With the buttons on the right arm support of the seat, which can be lifted up to 145 degrees, it is possible to control two groups of cylinders similar to the hands extending along the S shape of the spine. Three automatic massage programs (Neck and Shoulder, Waist, Energy), prepared by massage specialists, focus on players' often aching neck, shoulders and waist areas due to long sitting.

The actors also have the opportunity to combine the massage techniques used and adjust the massage for themselves. The rollers in the seat can be brought to six different positions to find the shoulder position suitable for people of different sizes. It is also possible to adjust the cylinder width to ensure that it fits in the right spot, regardless of body width. In addition, players can adjust the massage, which focuses only on a certain point. Thus, more attention can be paid to aching spots.

Predator Gaming Chair x OSIM, with black carbon fiber patterned PVC leather with dark gray and teal lines, offers a sporty and professional look. Two Bluetooth speakers in the headrest of the seat reinforce the gaming atmosphere without the need for headphones.

The Predator XB3 Series will be available in August in the EMEA (Europe, Middle East and Africa) region, starting at 439 euros.

Predator Orion 9000 will be available in October in the EMEA (Europe, Middle East and Africa) region, starting at 2,799 euros.

Predator Orion 3000 will be available in the EMEA (Europe, Middle East and Africa) region at prices starting from 899 euros in August.

Nitro 50 will be available in August in the EMEA (Europe, Middle East and Africa) region with prices starting from 799 euros.

Predator Cestus 350 gaming mouse will be available in the EMEA (Europe, Middle East and Africa) region for prices starting from 99 euro in the second quarter.