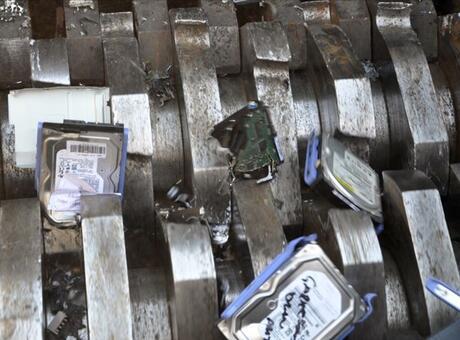 The integrated electronic waste recycling company, which started operating 16 years ago in Kocaeli, recycles electrical and electronic goods that have completed their lifetime, and recycles them in the European Union (EU) standards and bring them to the economy. and contributes to the environment and prevents access to personal data.

Hard disks, memory cards, mobile phones, CDs and flash memories in which computers, mobile phones and tablet computers contain information about individuals, institutions and banks in Exitcom Recycling company, which is established on an area of ​​3 thousand square meters and 8 thousand square meters in Kartepe district. By destroying them safely, their precious parts are recycled.

The personal information of individuals and institutions is prevented from being captured by malevolent people by destroying valuable documents in computers, mobile phones and tablets by using methods that comply with EU standards.

"We work in accordance with the Personal Data Protection Law"

General Manager of the company Murat Ilgar, AA said in a statement to reporters in 1999 in Germany and 2004 in Turkey said they started working on electronic waste, said they provide 92 to 95 percent recycling percent of incoming waste.

Ilgar said that after separating the wastes from various companies, institutions and organizations, they destroyed them and recycled their valuable parts as raw materials.

Stating that information security is an important issue that has entered the human life with the development of technology, for this reason they have recently started studies on information security, Ilgar said, "Personal Data of digital devices such as laptop, computer, mobile phone, CD and memory card are making their destruction according to the Law on the protection standards. it is known that in 2016 the Personal Data protection Act output. Furthermore, as 2017 also their destruction, was published regulations regarding the rendered anonymous. But unfortunately standard in Turkey regarding this regulation has not yet been determined yet. However, This information needs to be destroyed in any institution and organization, so that it will not be used again. Our company is serving in this regard. " he spoke.

Drawing attention to the importance of information security, Ilgar continued as follows:

"We can have personal information on the incoming documents. In our daily life, we can give our personal information to some institutions and organizations. For example, we may have given it to a bank, shopping center or a business place. If you try to destroy these digital materials or written documents in a way that does not comply with the standards, they can be made readable. There are relevant European Union standards and special facilities. We also serve our facilities in these standards. "

Pointing out that the discs can be erased but some information may still be present in them, Ilgar underlined that the materials should be broken at certain levels and the information in them should be made inaccessible.

According to the Law on Protection of Personal Data, Ilgar stated that the real and legal persons who want to destroy personal data should fulfill this responsibility, saying, "The incoming information is passed through different stages within the framework of certain rules. to prevent it from getting into your hands. " he said.

In case of destruction of data or information containing material, describing could be passed to the hands of others Ilgar, "Currently both in the world as well as a lot of information theft in Turkey is made by this method. Destruction is unable digital device or written evrakd is solved our knowledge and then our against us are used. We want to attract this attention. associated with it in the European Union in particular has very strict standards for disposal section. these standards have the appropriate technology and years of use. Environment and Urban Planning Ministry, Turkey has started to work within the scope of the Personal Data Protection Act. this we expect studies to go further. " used expressions.