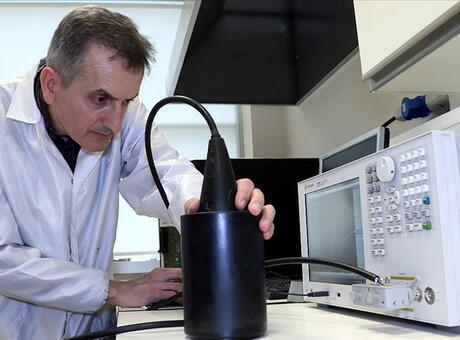 Gebze Technical University (GTÜ) Faculty of Materials Science and Engineering DepartmentProf. Dr. The acoustic signaling device, which indicates the location of the new type submarine developed locally and nationally by Sedat Alkoyve team, was used in Pirireis, the first ship of the New Type Submarine Project.

Apart from the sonar systems, the device, which can be used in civil applications such as medical ultrasound, fisheries, oil exploration at sea and visualization of the fault lines on the seabed, contributes to the national economy with its original design, local and national identity.

Professor Teknopark in 2012 Dr. Sedat Alkoy and his wife Prof. Dr. The sonar beacon system, which was developed in cooperation with ENS Piezoayhürlar company and Koç Bilgi ve Savın AŞ, founded by Ebru Menşur Alkoy, was installed in Pirireis, the first submarine of the New Type Submarine Project.

importance is given to expressing Alkoy indigenization in the defense industry in Turkey, noted that the reduction of external economic dependence on this point and provides advantages in terms of security.

"There is also interest from the system abroad"

Translating that they have designed and prepared some prototypes, Alkoy said, "The prototypes we have made have become products after being tested in terms of both depth, pressure, and environmental conditions. We have started production in series. These systems will be installed in other submarines. " He gave the information.

Prof. Dr. Stating that they have about 20 years of experience in these systems, Alkoy stated that Professor of such materials. Dr. He said that they received training with Ebru Menşur Alkoy.

Stating that they have an engineer team working with them, Alkoy said:

"These are not produced in large numbers. Devices that require special knowledge and design. Prototyping lasted for 1.5 years after the first operation. After that, a product that worked and provided all the desired things emerged. If we did not make this system, it would be taken from abroad under normal conditions. If you think of it as a system, it is not only the device and sensor part we produce, but there is electronics behind it and there is software for this electronics. We are making the device and sensor part, the electronics and software part is done by Koç Information and Defense Inc. This is a great team We are designing and developing the critical component sensor. It is important to produce a critical military product locally. There is an interest in the system from abroad. There is a meeting with the Pakistani fleet at this point. Koç Bilgi ve Savunma AŞ team attends international fairs. Sions. They also say that interest in the system. "